EndovascularWithin the blood vessels/vascular system. simply means within the blood vessel. Instead of open surgery, the aneurysm is accessed via a catheterA flexible tube for insertion into a vessel, body cavity, or duct; used for an angiogram of the brain arteries and in the endovascular treatment of brain aneurysms to provide access to the aneurysm site. inserted in an arteryA thick-walled blood vessel carrying blood flow from the heart to any organ of the body, including the brain. (usually in the groin) and treated by inserting various devices (coils, stents, balloons, flow diversion devices) that prevent blood from flowing into the aneurysm. Endovascular treatment is also referred to as embolizationA technique performed by a neuroradiologist or a neurosurgeon in the treatment of brain aneurysms or brain AVMs. As an extension of an angiogram, a catheter is passed up into the arteries inside the brain into the arteries supplying blood flow to the AVM or inside an aneurysm. The blood vessel or aneurysm is then blocked off from the inside with either glue, metal coils or other substances. This is often performed as a prelude to surgery in brain AVMs, but occasionally may be curative without additional therapy..

The goal of endovascular therapy is the same as surgical treatment: to prevent rupture by safely sealing off the aneurysm from its parent arteryThe artery in the brain on which the aneurysm has formed..

CoilingAn endovascular treatment for aneurysms. The aneurysm is filled with a tiny platinum coil (or coils), causing the blood within it to clot and the aneurysm to be destroyed. Procedure
Endovascular treatment of aneurysms is most often performed in an angiography suite by a specialized team of doctors, nurses, and technologists. An interventional neuroradiologist or neurosurgeon trained in interventional neuroradiology is the primary doctor during the procedure. 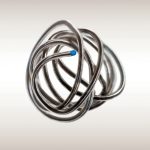 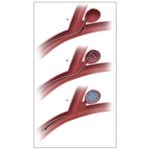 At the time of the procedure, your groin is scrubbed and shaved, usually on both sides. Sterile drapes and cloths are placed over your body, leaving the groin area exposed. A small skin incision, measuring approximately 6 mm (a dime is 18 mm), is made over the artery and a needle is used to puncture the blood vessel.

A sheath (thin tube) is then placed in the artery, which provides continual access to the artery. Using X-ray visualization and high-speed filming techniques that provide a continuous view of the normal blood vessels and aneurysm, the doctor inserts a catheter, led by a guide wire, and advances it to the site of the aneurysm. Through the catheter, a smaller microcathetervery narrow catheter used to deliver devices and agents in the endovascular treatment of cerebral aneurysms. is advanced into the aneurysm opening and the coil system is introduced.

The coil system consists of different materials, most commonly platinum and sometimes other gel-like and suture-like materials. The coils are soft and pliable, and are available in several sizes and shapes to fit correctly inside an aneurysm.

After Treatment
You will be monitored in a recovery area after the procedure. Although rare, there is a risk of blood clots or a strokeA disability caused by injury to the brain. Most strokes are caused by loss of blood flow to a portion of the brain (called an ischemic stroke or cerebral infarction) or by injury related to bleeding within the brain tissue (an intracerebral hemorrhage) or into the space around the brain (subarachnoid hemorrhage). associated with endovascular therapy. Drugs to prevent clotting may be used. The length of stay in the hospital varies for each patient. Patients treated for unruptured aneurysms can often go home within 24 hours. Patients with ruptured aneurysms remain in the hospital longer.

Follow-up imaging will need to be done to assess for the stability of the coil or other device and to make sure the aneurysm does not grow back. Your doctor will tell you when and how often you will need follow-up studies. It is very important to adhere to your follow-up schedule.