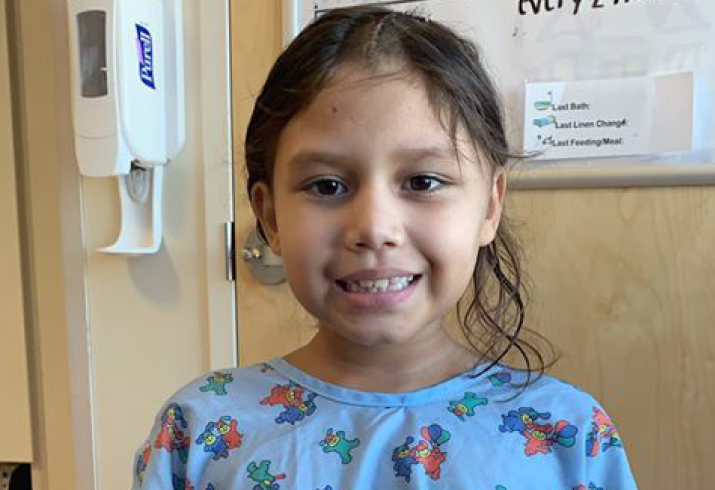 My daughter’s name is Elianna and she’s an 8-year-old healthy girl. One day she hit her head when she jumped into a pool. Elianna came out crying and kept saying her head hurt, so I gave her some medicine, but she started vomiting. She was fine the rest of the day, however, in the middle of the night she said her head felt big, so I took her to the ER. The doctor thought she was getting a cold, even though I told her what happened. I asked to get a CT scan, but the doctor said no because of the radiation and gave her Tylenol and sent her home.

Elianna had no complaints until a week later, so I took her to a children’s hospital, and she had a CT. Turns out she had a hemorrhage between her skull and her brain. In the morning she had CT scan with contrast. We were told she had an aneurysm and needed to be transferred to John Hopkins. A team explained that they were going to do an endovascular coiling. As a parent I had to ask the question, ‘What if it doesn’t work?’.

When she was in surgery, it was the hardest thing ever. She needed to have clipping because the aneurysm was bigger than they anticipated. When she woke up the next day, she didn’t recognize me and that was difficult, but she recognized her dad and grandma. Her recovery was remarkable, she remembered a lot, walked and was starting to be a little more herself. Every day, I see my little girl coming back slowly to the upbeat crazy outgoing self she was prior to all of this. She is a walking miracle! Doctors say if she didn’t hit her head in the pool, she would have never been symptomatic, and we might have never known. 5 months later we are still recovering, and she is having a hard time understanding why this would happen to her. I can’t answer those questions, but I remain positive and do the best I can to take care of her and get her the help she needs. It’s a long road ahead and she has good days and bad days, but I want her to see how she can impact other people going through the same health condition. She is in the stage of self-guilt and I want her to see that she is not alone.