I was sitting at my desk at work when my 19-year-old son called and said, “Mom, I have a brain aneurysm.” At that moment my world stopped. I did what every mom today probably would have; I googled brain aneurysm, and panic set in.

It all started roughly six months prior to his diagnosis. My oldest son was suffering from severe, debilitating migraines. The migraines would come and go with no particular warning but when they did come they would stop him in his tracks. They would last days and he would be held up in his room, the windows covered for complete darkness, noise to a minimum. Many nights he would come lie in my bed, “Mom, make the pain go away,” he would say as he cried out in pain. “Why is this happening to me?”

As a mom, I felt helpless and did not know how to make the pain go away. I made my son an appointment to see his primary care doctor, who ordered an X-ray. That’s when the doctor called him with the news and wanted him to see a specialist in Boston.

During the time leading up to my son’s visit with the specialist, the migraines continued and the uncertainty about his aneurysm left us unsure about his future. A CT scan showed that his aneurysm was dormant and because it was in a location that can create health problems if operated on, the doctors suggested not performing surgery. His migraines continued for quite some time until a medication could be found to alleviate them. He now takes medicine every day to prevent the migraines. If he misses just one dose it could bring the migraines back.

This past August I had the most amazing honor to join a team to run a seven-mile road race in Falmouth, Massachusetts to support the Brain Aneurysm Foundation (BAF). The day before the race I met the BAF team that was running the race to raise awareness about brain aneurysms. The people I met on the team were amazing, and hearing their stories about how they, too, have been affected by a brain aneurysm was something I will never forget. Some had a brain aneurysm; others had lost parents, spouses, and friends.

What I didn’t know — as I am sure many others also don’t know — is that 1 in 50 people have a brain aneurysm. The team’s shirt has the tagline “1 in 50” on it, and a very touching thing happened on the day of the race. As all of the runners were waiting for the start, a woman tapped me on the shoulder, and said, “Thank you for running for the Brain Aneurysm Foundation. I am 1 in 50.” An aneurysm survivor, she had had an operation less than a year before. I could barely keep my composure. We embraced and wished each other luck.

When I crossed the finish line that hot, humid day in August, I had tears of emotion running down my face — not just for running for this cause for my son but also for the survivor I’d met that morning, as well as the BAF team I was running with, and for all the millions of people affected by a brain aneurysm.

September 30, 2017 was one of the happiest days of my life. My son, who is now 25, walked down the aisle to marry the love of his life. He must take the medication for the rest of his life and have a CT scan every year, but every day I count my blessings that his aneurysm is, and will remain, dormant. 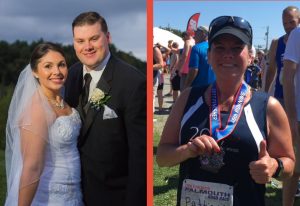