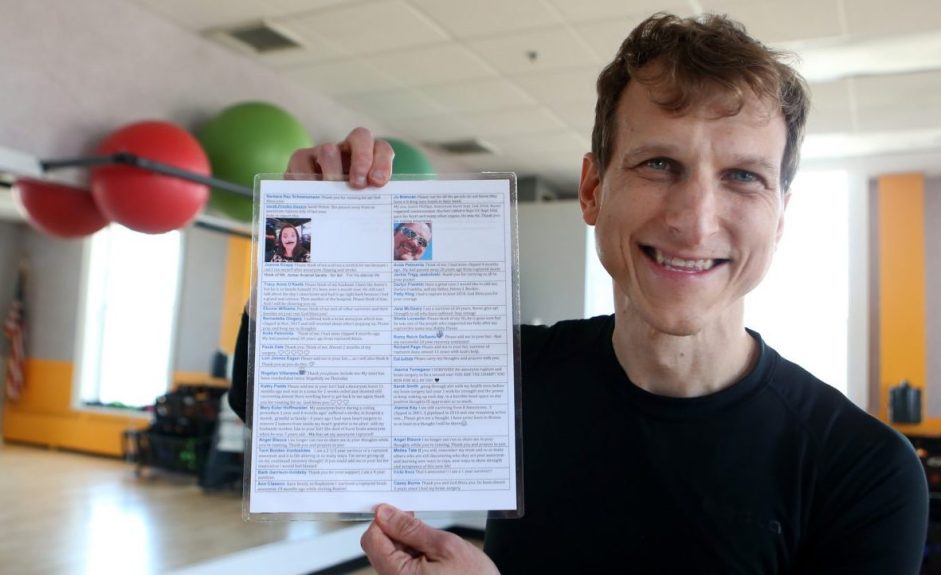 Russ Vanderpool has two birthdays: The day he was born, and the day he didn’t die.

“I live each day as a gift,” said Vanderpool, who’s 51 by first metric and just under 3 by the latter. “I shouldn’t be here, right?”

Vanderpool plans to run the Boston Marathon on Monday just a few years after an aneurysm burst in his head, prompting three high-risk brain surgeries at Brigham and Women’s Hospital to fix the bleeding and remove a condition called brain arteriovenous malformation, or AVM, that had contributed to it.
The Newton resident is running to raise money for the Brain Aneurysm Foundation Inc., saying about his inspiration, “Let me just carry in myself the people who had aneurysms and didn’t make it.”

Vanderpool means that literally, in a way. As he talked to the Herald last Thursday, he was trying to figure out how to secure a laminated piece of paper to his body that featured three dozen messages from people affected by brain aneurysms. Maybe taped to his thigh, he thought, or maybe on his back, though then he wouldn’t be able to read it as he ran. Maybe he’d record himself reading the messages people had sent to him so he could listen to it when he ran, he said.

“I want to be able to think about them as I run,” Vanderpool said.
Vanderpool readily recounts the story of his own aneurysm, starting a sentence with, “It was so funny,” before ending it with, “They put a hole in my head,” accompanied by stabbing motions to illustrate.

On June 3, 2016, Vanderpool was bent down mid-lunge during one of the particularly intense yoga classes he teaches in the basement of the West Suburban YMCA in Newton when a brutal headache struck him alongside a wave of nausea and the inability to catch his breath. A woman in the class quickly called 911 and the firefighters from the fire station across the street flew over and took him to Brigham.

Dr. Mohammad Aziz-Sultan, Brigham’s chief of vascular and endovascular neurosurgery, performed three surgeries on him; the first, using an x-ray and a catheter, sealed the aneurysm, stopping the bleeding into his brain. Then a week later, the doctor went to work on the malformed cluster of blood vessels.
“The AVM is like one of those things you see in the movies where they’re defusing a bomb — you clip one, then you clip another, and then when you clip enough, it’s defused and you can take it out of the room,” Aziz-Sultan told the Herald. “If you cut the wrong one, it could explode.”

He didn’t, and the third surgery, which involved opening up part of Vanderpool’s skull to scoop the AVM out, went great. Vanderpool was back to teaching yoga by the end of July, less than two months after his brush with death.

“I just forced myself,” Vanderpool said. “I just had to get back.”
Brain aneurysms, which Aziz-Sultan described as essentially a blister on a blood vessel, are actually fairly common, affecting one out of every 50 people. The problem is when they rupture, as Vanderpool’s did — a phenomenon that kills half of the people it happens to on the spot, while 60 percent of the rest don’t make it out of the hospital, the doctor said.

Aziz-Sultan said anyone with a family history of aneurysms should get screened, and people who start getting sudden, severe headaches should see a doctor.

“Well, he’s running a marathon,” Aziz-Sultan answered with a laugh, “Let’s just say he’s doing better than I am.”