AVM is an abbreviation for arteriovenous malformation. An AVM is a tangle of abnormal blood vessels (arteries and veins) that are linked directly via connections called fistulas or shunts. AVMs can occur in many places in the body but AVMs in the brain are the most common. Approximately 18 people in 100,000 in the United States have an AVM in the brain, although only about one in 100,000 have been diagnosed.

In a person with a brain AVM, blood flowing at high pressure through the arteries pumps directly into the veins rather than passing, as it should, through a bed of tiny vessels (called a capillarySmall blood vessels that normally connect the arteries (which bring blood flow to the brain) to the veins (which carry the blood flow away from the brain). The capillaries are very thin-walled, allowing the blood cells to transfer oxygen and nutrients to the brain tissue. bed) that nourishes the brain tissue and reduces the pressure of the blood entering the veins.

Eventually, the consistently high-pressure blood flow through the AVM can cause the vessels to expand, potentially causing an aneurysm, a weakened ballooning of the vessel that can rupture and hemorrhage (bleed) into the surrounding brain tissue. This is a form of strokeA disability caused by injury to the brain. Most strokes are caused by loss of blood flow to a portion of the brain (called an ischemic stroke or cerebral infarction) or by injury related to bleeding within the brain tissue (an intracerebral hemorrhage) or into the space around the brain (subarachnoid hemorrhage)..

In about 5-10% of individuals, AVMs are discovered during a routine examination. In about half of patients, an AVM makes its presence known with sudden hemorrhage, or stroke. Others present with symptoms such as sudden/severe headaches, nausea/vomiting; seizure; and symptoms normally associated with having a stroke, such as difficulties with speech, movement, or vision.

In 20-30% of cases, bleeding causes temporary or permanent brain damage, resulting in limb paralysis or weakness or difficulties with speech, memory, or sight. In 10-15% of cases, the bleeding results in death.

AVMs affect males and females about equally, and most who are diagnosed with an AVM are between 20-60 years old, although AVMs, which are thought to be present at birth, are diagnosed in children as well.

Individuals with an AVM may also have a brain aneurysm. In fact, between 10-60% of patients with AVMs have one or more aneurysms. 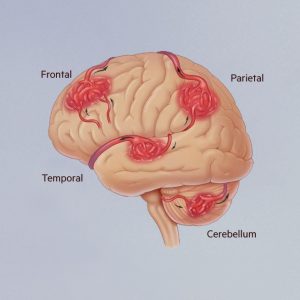 Example of AVM’s in various locations. *

The cause of AVMs is not yet understood. Most experts believe that AVMs develop during fetal development and therefore exist at birth (known as a congenital condition), however it is possible that some AVMs develop after birth.

If an AVM is suspected, a variety of tests are available to make the diagnosis and establish its location and size and also whether it has hemorrhaged, which helps doctors determine the optimal treatment. These are:

• Computed tomography (CT)
• Magnetic resonance imaging (MRIShort for magnetic resonance imaging. MRI is a painless, non-invasive procedure that uses radio waves and a powerful magnetic field to produce detailed images of the brain and other parts of the body.)
• AngiogramThe diagnostic radiology study performed to search for an aneurysm or vascular malformation. The radiologist passes a catheter up from an artery in the groin to the arteries in the neck; he or she then injects dye into the carotid and vertebral arteries while multiple x-rays are taken of the arteries in the brain.

The goal of treatment is to prevent hemorrhage, the risk of which is about 2-4% per year and even higher if a patient has had a previous hemorrhage. Even if someone does not have any symptoms, the risk of hemorrhage is still present.

Doctors consider many factors when determining which treatment is optimal for a specific patient. These include the patient’s age and general health, the location and size of the AVM, and the patient’s symptoms.

The major treatments for AVM are listed below. Some patients may benefit from a combination of treatments.

Surgery (microsurgical resection) — This is an invasive surgical operation to remove the AVM from the brain. During this operation, the patient is under general anesthesia. When surgery does not involve any complications, the patient usually stays in the hospital four to six days, with at least one day in the Intensive Care Unit.

Stereotactic RadiosurgeryAlso known as stereotactic radiosurgery, it is the use of high-dose, focused beam radiation for the treatment of brain AVMs. This technique does not involve open surgery. Using computer guidance, it is a specialized technique for targeting the AVM for irradiation while sparing the surrounding brain structures. — This is a non-invasive treatment in which multiple focused beams of radiation are directed at the AVM, injuring its abnormal vessels and eventually destroying the AVM. It is most effective for small AVMs or those in parts of the brain that are considered “eloquent” (areas that, if injured, result in disabling neurological deficits). Generally, radiosurgery is completed in one to three sessions. While 70-80% of AVMs are obliterated with radiosurgery, this usually takes about three years, during which time there is a small risk of hemorrhage (about 2% per year). If the AVM has not been obliterated after three to five years, re-treatment with radiosurgery can be performed safely and effectively. Complication rates of radiosurgery are low and most are temporary.

EmbolizationA technique performed by a neuroradiologist or a neurosurgeon in the treatment of brain aneurysms or brain AVMs. As an extension of an angiogram, a catheter is passed up into the arteries inside the brain into the arteries supplying blood flow to the AVM or inside an aneurysm. The blood vessel or aneurysm is then blocked off from the inside with either glue, metal coils or other substances. This is often performed as a prelude to surgery in brain AVMs, but occasionally may be curative without additional therapy. (endovascularWithin the blood vessels/vascular system. surgery)— This is a non-surgical (minimally invasive) procedure in which one or more blood vessels supplying the AVM are plugged using various materials introduced via a catheterA flexible tube for insertion into a vessel, body cavity, or duct; used for an angiogram of the brain arteries and in the endovascular treatment of brain aneurysms to provide access to the aneurysm site. (thin tube) inserted in the top of the leg. This treatment is generally used in combination with microsurgical resection or radiosurgery to reduce the size of the AVM and/or close off blood vessels that may be difficult to access during surgery.

Medical management — This involves regularly monitoring the AVM with a focus on managing any symptoms the patient may be experiencing. This is often the best option for patients who have a high risk of complications from surgery or radiosurgery, such as those with large AVMs in critical areas of the brain.