When deciding whether to treat an unruptured aneurysm, the risk of treatment is compared with the risk of leaving the aneurysm alone. Treatment may increase the likelihood of suffering a strokeA disability caused by injury to the brain. Most strokes are caused by loss of blood flow to a portion of the brain (called an ischemic stroke or cerebral infarction) or by injury related to bleeding within the brain tissue (an intracerebral hemorrhage) or into the space around the brain (subarachnoid hemorrhage)., for example, and may also lead to problems with thinking or functioning, especially among elderly or ill patients.

Decisions about treatment must therefore be specific to each patient. Your doctor will take into account these factors:

Most aneurysms are quite small and cause no symptoms unless they rupture. Many unruptured aneurysms are found incidentally when tests are being done to screen for other conditions.

Rarely, unruptured aneurysms may become large and press on nerves in the brain, causing symptoms such as blurred or double vision, a drooping eyelid, a dilated pupil, weakness and/or numbness, or pain above and behind the eye. If you experience these symptoms seek prompt medical attention. Unruptured aneurysms rarely cause chronic headaches. 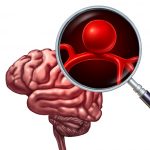 A ruptured aneurysm usually causes a sudden severe headache, often described as the “worst headache of my life.” Other signs of rupture are:

Although the bleeding resulting from a rupture probably lasts only seconds, there is much that can happen as a result.

For instance, the blood can destroy or damage brain cells. It can also cause the arteries to narrow erratically, a condition called vasospasmA potential delayed complication of a ruptured aneurysm in which blood vessels in the brain spasm, or narrow, limiting blood flow to vital areas of the brain. This can result in stroke or brain tissue damage., reducing blood flow to vital areas of the brain. Vasospasm can cause an ischemic stroke (also called a cerebral infarctionA region of the brain which has died due to lack of blood flow (aka ischemia). This is the most common cause of stroke.) if the arteries narrow to the extent that not enough blood gets to the brain tissue.

If there is a lot of blood in the spinal fluid, it can slow or block the spinal fluid’s normal movement. This may lead to the buildup of fluid in the cavities of the brain, causing pressure on brain tissue — a condition called hydrocephalusA condition in which too much fluid builds up within the fluid-filled spaces inside the brain (ventricles), putting pressure on the brain tissue. This may occur after aneurysm rupture..

People who have suffered a ruptured aneurysm may have temporary or permanent deficits. These may include vision, speech, and perception problems; memory and thinking problems; fatigue; and/or issues with balance and coordination. You can learn more about these and how to cope with them in our Recovery Guide.