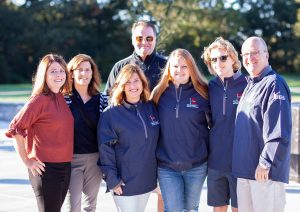 On April 30, 2017, Tom Tinlin’s life was changed forever due to a ruptured brain aneurysm. He was told by one of his doctors that he came as close to dying as one can, without actually doing it. Due to a lack of awareness, Tom was misdiagnosed the week before even though he presented classic symptoms to his primary care physician.

Since that day, Tom has learned that three other patients also suffered an aneurysm rupture that same week and went to the same hospital as him, yet he was the only one to survive. Knowing how fortunate he is, Tom and his family have dedicated themselves to raising awareness about this treatable disease.

In 2019, Tom and a group of volunteers, organized the inaugural Tinlin Family 18 for 18 Golf Tournament – named not only in recognition of the staggering fact that an aneurysm ruptures every 18 minutes, but also in recognition of all of you. You are all part of our brain aneurysm family as we band together to fight this disease. The event raised over $150,000 through players, sponsorships, donors and many more that supported the event, making it the largest single fundraiser in the Brain Aneurysm Foundation’s 25 year history. In his three years of volunteering for BAF, Tom has raised well over $200,000.

The funds raised not only fund the Thomas J. Tinlin Chair of Research, but also go towards brain aneurysm awareness, support and education.